Posted on June 19, 2015 by darkcloudybluesky

Taiwanese actor Show Luo and Chinese blogger Grace Chow (Zhou Yangqing) have been rumored to be dating each other since last year though there were no confirmations (yet) from both sides. The rumors heat up another notch earlier this year when it was reported that the two of them spent a holiday together in Japan with Show’s mother in tow. The two were even noted to be wearing couple’s jewelries and clothing during their stay in Japan. Show’s mother was also said to be getting along well with the blogger who has almost one million followers. 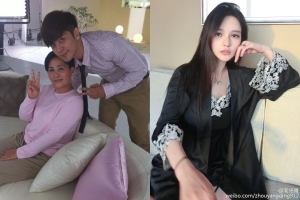 Show Luo and his mother spent time together in Japan with Grace Chow earlier this year.

Just recently, the two of them were spotted checking in at the same hotel in Shanghai albeit at different times and in different rooms. She checked in at room 8807, while he was in room 8307. On their first day at the hotel, he was seen sneaking into her room late into the night. He only left her room the following day, very early in the morning. The second day was also the same, with Show going to her room late at  night and only leaving very early the next day. When he checked out of the hotel, she also checked out one hour after.

Show Luo was caught sneaking to and from Grace Chow’s hotel room in Shanghai.

When Show checked out of the hotel, Grace followed suit an hour later.

When news of their Shanghai tryst got out, Show posted this message on his weibo, “Yes, thank you for everyone’s concern. You (media) all worked really hard. I will still continue to do my job well”, which seemed to be an indirect admission to their relationship.

He was linked several times before in the past with different women, including Makiyo, Selina, Tia Li and his co-host Linda Chien (Butterfly), but never once did he admit to having any relationship with any of them. It is only now that he’s taking that extra step when it comes to opening up about his intimate relationship.

His fans are divided with their reactions when it comes to his latest romance. While some have already sent their blessings to the couple, many are not in favor of the said relationship. One fan even commented how she had loved him for eight years, but after knowing how low his standard is for a girlfriend, she’s now giving him up for good.

The main reason why Show’s fans are having the hardest time trying to accept her as their idol’s girlfriend is that Grace is never a natural beauty to begin with. She underwent multiple plastic surgeries just to achieve her current look. Fans were quick to dig her pre-surgery photos and the difference between her then and now photos is quite remarkable. It’s like looking at two very, very different persons. Though not that bad-looking pre-surgery, her overall appearance was very ordinary as compared to how she looked after going under the knife. 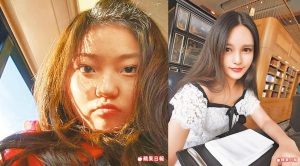 Grace Chow’s before and after plastic surgery photos. 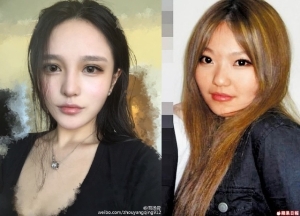 Another side by side comparison of Grace’s present and past photos. 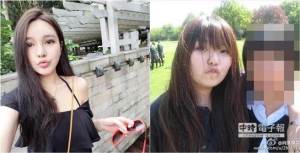 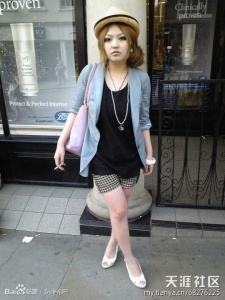 Grace Chow in her most natural and untouched state.

With her very much enhanced beauty after multiple surgeries, she was even labeled by her weibo followers as a dead ringer for Angelababy. 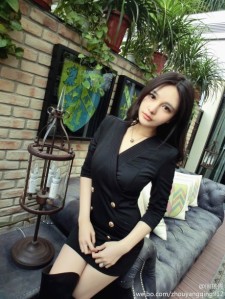 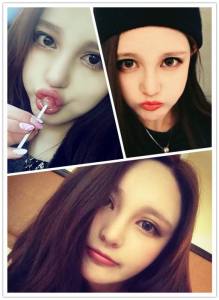 Another reason why fans are frowning down upon Grace is her smoking habit, although this is a very minor reason as compared to her “plastic surgery scandal”. 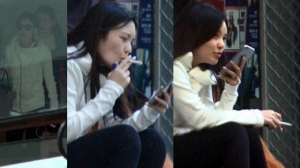 Grace was once seen smoking on the street while checking her cellphone.

It just makes me wonder how far this relationship is going to survive with so many opposition from Show’s fans. Since the news of them dating broke out, his fans have been mercilessly cyber bullying her by leaving nasty messages on her social account, with some even going as far as to threatening her.

If Show loves how Grace looks like now, and it’s not as though her face would just fall off overnight, I don’t see what the fuss is all about. But if ever they decide to get married one day and have kids of their own, then they shouldn’t be surprised anymore if their kids will look a little bit (more) different from how they look like today (sorry, I can’t help it :P). Kidding aside, loving a person shouldn’t be physical, since physical beauty will fade with the passing of time. It should be all about their personality and how well they compliment one another. If they do end up with each other in the long run, then his fans must understand that it’s their life to live and their decision to make. It’s each other whom they would have to live with day in and day out for the rest of their lives, and not with any one of their fans.

Besides, it’s not as though Show himself is a natural beauty. 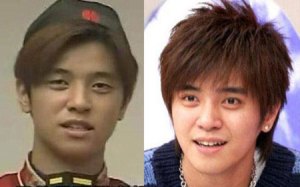 Show Luo’s past and present photos. 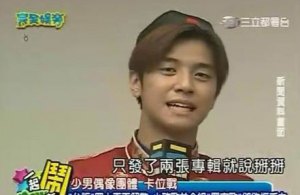 Show Luo during his much younger days. 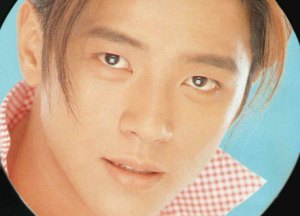 Show Luo back in the earlier days.

To end this post, though totally unrelated, I just want to throw in this photo of Angelababy and Huang Xiao Ming, just for laughs. 🙂