Posted on April 27, 2015 by darkcloudybluesky

Despite the herculean efforts of both Ethan Ruan and Tony Yang to win back the love (and trust in the case of Ethan) of their respective girlfriends, both Tiffany Hsu and Amber Kuo confirmed that their respective relationships with the actors have officially ended.

Last week, Tiffany attended a press conference of her upcoming, very aptly titled PTS drama It’s Time To Wake Up and was grilled about the real status of her relationship with Ethan. She admitted that they’ve been estranged for quite some time now, which was in sharp contrast to Ethan’s earlier statement that everything was still fine between the two of them. When the Italian-Taiwanese model-actress was further probed if the reason for their break up was due to Ethan’s cheating, she refused to disclose any more information in order to protect the two of them.

Meanwhile, Taiwanese actress Amber Kuo also confirmed that she and Tony had long broken up. She also refused to give further details on the reason of their break up although there were earlier reports that the reason was because she had fallen out of love from her boyfriend of three years. Tony recently released a photo of himself sans his shirt on his weibo account and fans were shocked to see how much weight he had lost, clearly showing how much the break up had taken its toll on him.

Tony Yang lost a considerable amount of weight following his break up with Amber Kuo. 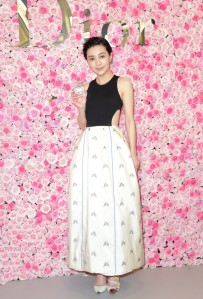 I’ve always believed that Tiffany was just too good for Ethan and that she stayed with him much longer than she should have. The rumors of his constant cheating on her had been going on for years, but she had always been lenient towards him, always willing to forgive and give him countless chances. It’s not fair to her that she stood by his side when he was just a struggling actor prior to his Monga glory days, while he, on the other hand, remained steadfastly vague on his indecision to marry her even after being together for more than eight years. She deserved so much more than how he treated her. It’s time she finds herself another man who will know and appreciate her true worth.

As for Amber, I can’t blame her for falling out of love, although I do hope that Louis Koo was not the reason why she did. While I can’t deny that Louis is a good man, I don’t think he is the type to be tied down. Tony, on the other hand, seems like a real nice guy, the type who will settle down and become that responsible family man. Its just too bad that being nice is no longer enough to keep his woman by his side. The two of them are just not meant to be.

Nothing really lasts forever. Somehow, everything must come to an end. I read somewhere that there really are no happy endings. Even long married couples can still be separated in life through death. Happy endings just depend on one’s perspective. So enjoy it while it lasts. You never know when it’s going to end.